This is a Guest Post written by Will Wilson

I have $100 worth of Goflam. I’m going to give it to you for just $2! That’s an amazing price, right? Well, no, because you – I would hope – have attached no worth to whatever a Goflam is. It doesn’t matter how much I cut the price of one – you’re not going to buy something that means nothing, because if it means nothing, it’s worth nothing. Everything that exists in your game, from the beautifully animated assets to the clever stat balancing you spent months putting together, holds literally zero value to a player when they first start the app.

To create that value you’ll have to ensure your economy loops and design, not to mention the UX and UI, help to accentuate and create the value in the player’s heads as quickly and painlessly as possible.

There are four main components to help that along:

Ensuring that all items satisfy at least one (preferably more) of these core components is the solid foundation that underpins great economy and systems design.

The most basic way of creating value is Utility. This doesn’t just mean that an item is useful because it does x, but also creating the understanding of what, how and why the item is used. How to establish that cause/effect baseline to items and currencies, then, should be the number one question for designers as early as when the first economic flows. Merely showing a number going up as a consequence of an action can work with certain groups of players (there is a reason why Clicker games have a fanbase), but it’s far more effective to show a state change – an undesirable outcome is now a desirable outcome.

A great example of this is deployed by CSR Racing (1 and 2)’s FTUE, which deliberately forces the player to lose a race prior to introducing the concept of upgrades to them. This is not accidental – by teaching the player that this action (upgrading) results in an alternative conclusion (a loss is now a win), they instinctively link the benefits of upgrading to overcoming difficulty in the game. 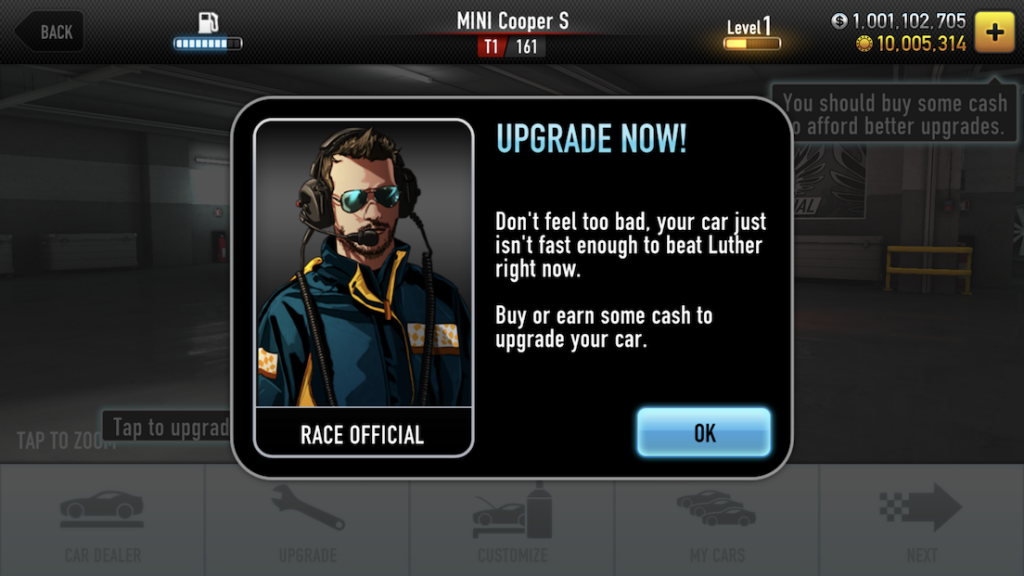 CSR Racing takes a massive risk in failing the player as part of the FTUE. But it also effectively teaches the value of upgrades well beyond a simple textbox

But that’s a simple core loop demonstration – what about something more complex like an RPG with a rune or gear system? Again, it’s about ensuring that communication of why and how you can create a strong character or item is as clearly demonstrated as possible. This doesn’t mean putting tutorials and question marks everywhere for the player to tap, though. In fact, some of the best examples of helping players to see the value in items use the player-base itself to promote them. Summoner’s War, for instance uses a player-run forum for every character that let’s people quickly see who or what they need, as well as – most importantly – what runes and other latter systems they should aim to get for the character to make them even better. Contextualising the value of potentially complicated games systems for other players. 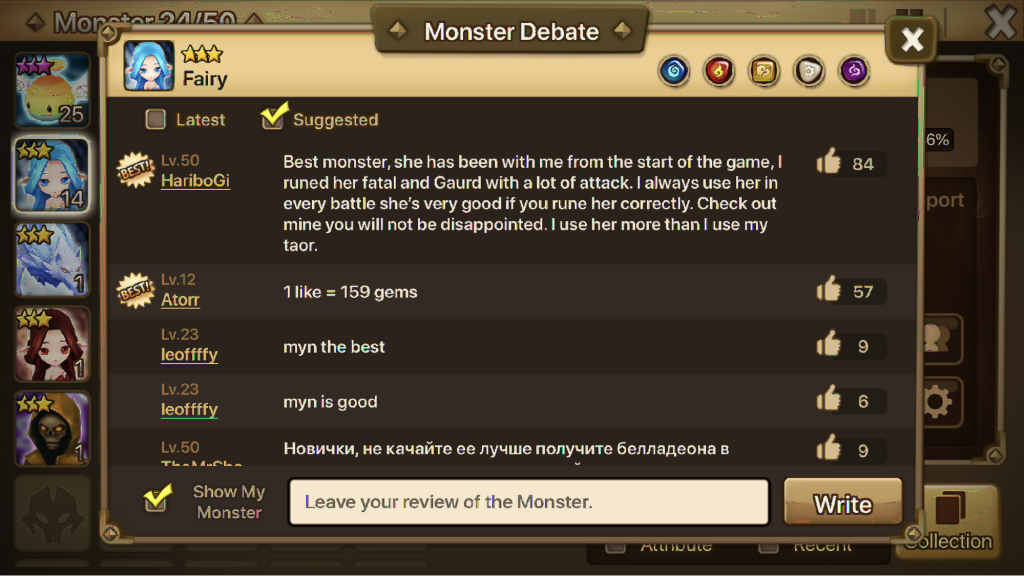 Summoners War has a full tutorial for its systems, but also has a one-button access to user-created builds and strategies for every monster you find. Because these are from ‘real’ people (aka. not the developers), they come across as much more genuine (because, well, they are!)

There is one last consideration when it comes to establishing utility – does usage of the item change over time? Ensuring that something can be always used and help the player, no matter how far they may be in the game, is vital for creating a well-rounded economy. Take FIFA Ultimate Team’s Squad Builder mode – what good is a Bronze tier player after the initial few hours of gameplay, when the player has a full squad or three filled to the brim with Gold (and even rarer) players?

Instead of letting these cards clog up the inventory, the player is given the opportunity to ‘trash’ sets of cards (for example, a Bronze League 2 team) for either limited edition or higher-tier players, thus ensuring that even when they have a core team, there is still a desire to collect more from all rarities in order to advance their squad. 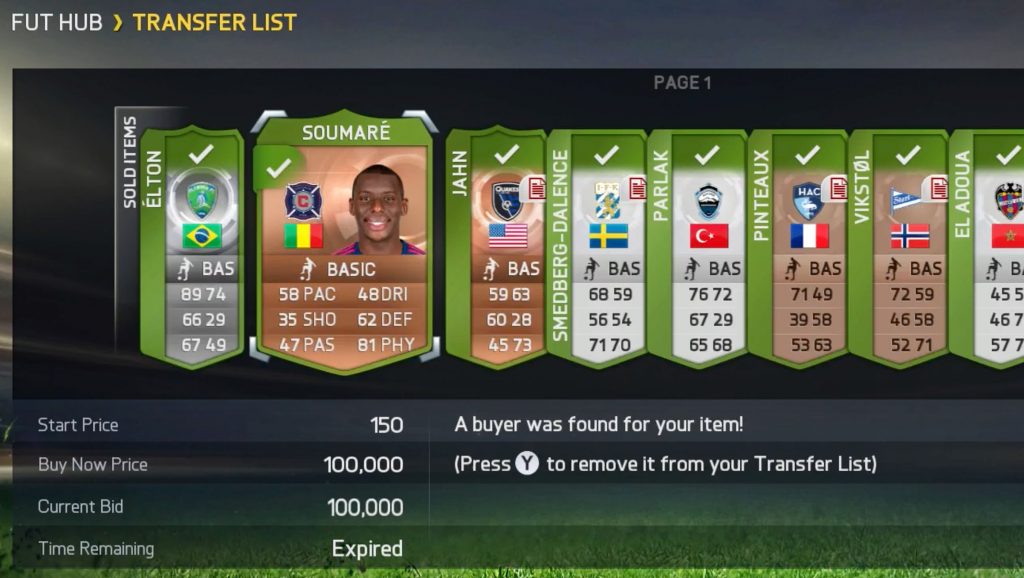 By ensuring the weaker cards are always able to be used in a way that furthers the goal of the player, FIFA’s Ultimate team creates demand on what otherwise would be ‘undesirable’ players. It also manages to create a clever and compelling puzzle game in the process.

The more traditional way of ensuring commons and ‘poor’ cards or items are still useful is the classic ‘feeder’ mechanic employed by classics like Puzzles & Dragons, but while it does make sense on paper, the exponential nature of XP requirements devalues these items over time and eventually results in them losing their value. 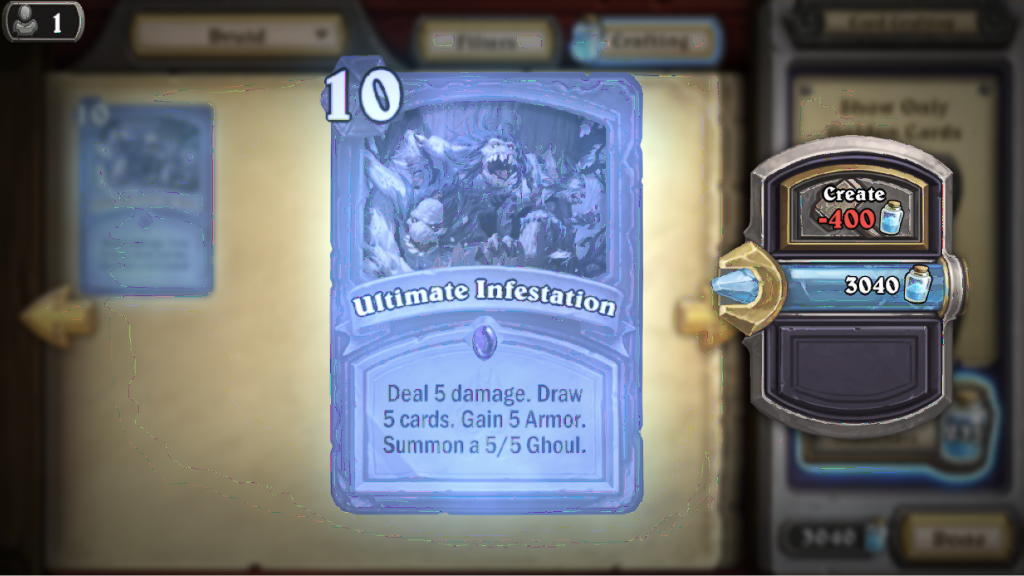 Hearthstone takes a more basic approach to useless cards, allowing players to ‘dust’ them to gain a universal currency for creating any other card in the game

So you’ve established how useful that item is and the player has a good grasp on why they should care about obtaining it. Now to establish its relative worth in the game, and the key lever for that is Exclusivity.

This exclusivity is established via the taps and sinks in the economy – if the former is greater than the latter the item is of low value, and visa versa when you want to create something of high value. Ultimately the more of said item that ends up sitting the player’s inventory, the harder it is to convince them that they need more. This is a particular problem with Hard Currency, and the reason why a number of games, like Marvel: Strike Force, seem to have almost limitless ways to spend it. 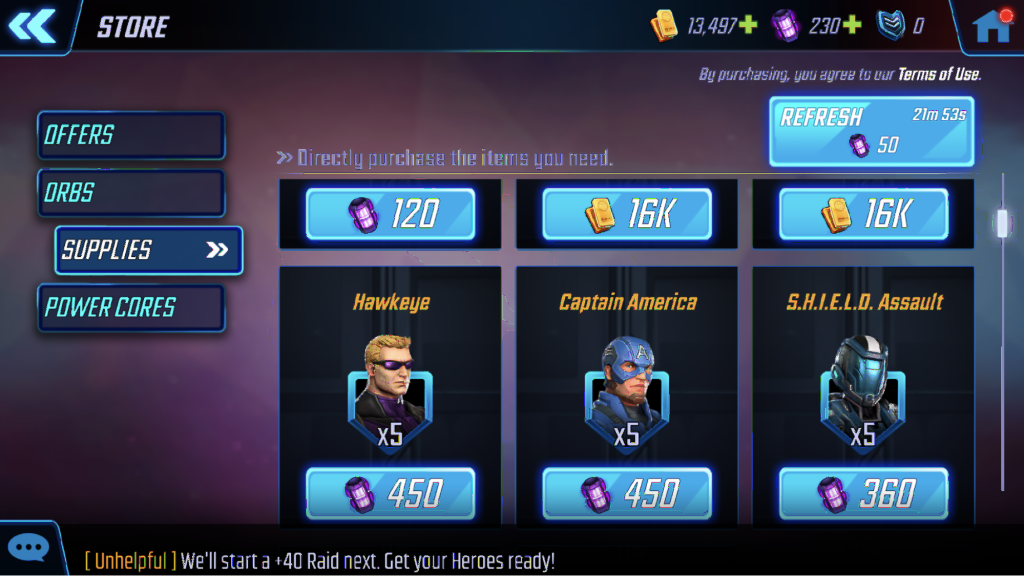 Almost every screen in Marvel: Strike Force has at least one, usually more, ways of spending Hard Currency, reducing the risk of ‘hoarding’ and devaluing the currency in the process.

Exclusivity can be established in other ways, too. A limited time-frame or limited run of an item or character creates an artificial demand that can be completely disconnected from the utility of said item, although in these instances the item must have something else about it to generate value (a time-limited opportunity to earn an item that can be earned normally via gameplay is not going to suddenly make it more valuable).

It’s also worth considering the effort the player must make to activating either the taps or sinks of that item in the first place. Hearthstone‘s Dust, for instance, is earned at a painfully slow rate, which in turn helps reinforce the value of the Legendary cards by allowing the player to put an estimate of how much time it would take to obtain them, even if – on a paper loop – these cards can simply be obtained through gameplay.

One benefit licensed games have is that their items often come with value attached to them – the characters, locations, and other elements are things fans of the franchises are already familiar with. A great example of this is Daryl in The Walking Dead: No-Man’s Land or Darth Vader in Star Wars: Galaxy of Heroes. Both are used as powerful retention devices, earned via gameplay (in the case of Vader, this is the only way he can be earned). 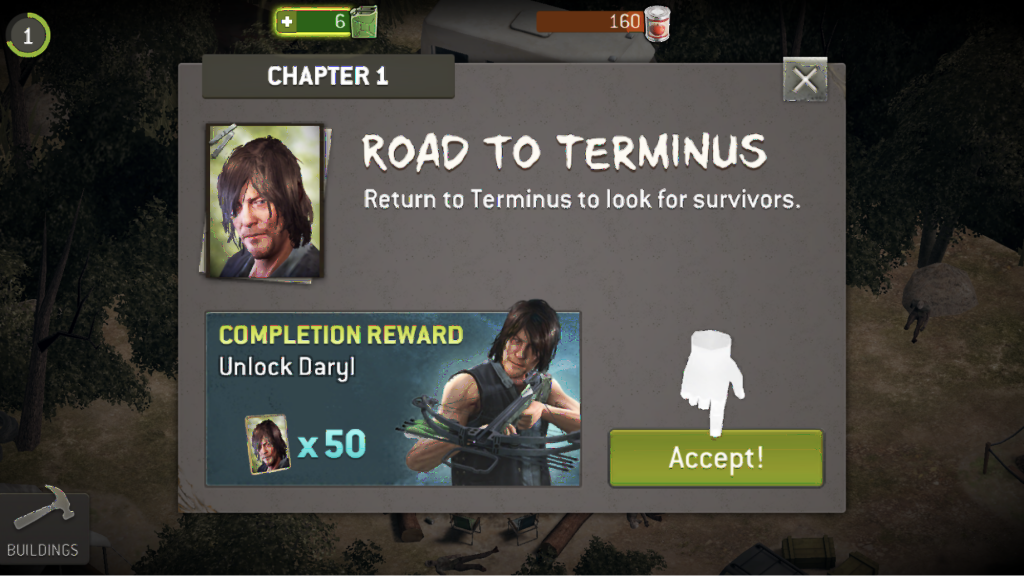 Daryl in Walking Dead: No Man’s Land is used as a compelling D7 retention device for fans of the show. If you’re a fan of The Walking Dead, you have to have him… 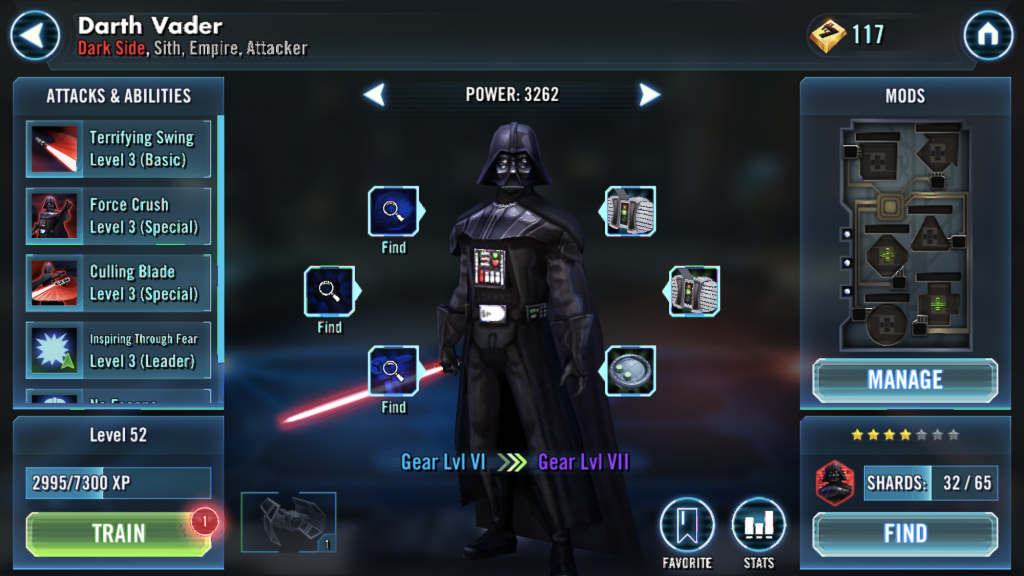 …meanwhile, Galaxy of Heroes uses the iconic Darth Vader as their long-term achievement reward. If you’re an original trilogy Star Wars fan, you have to have him.

Even when it comes to non-licensed titles, though, do not underestimate the power of pre-existing biases when it comes to how players see value. In Best Fiends Forever we switched from collecting and spending ‘mites’ (the original game’s currency) to coins prior to launch, simply because getting coins ‘felt’ better internally, and testers had an immediate understanding of why they want more of the item. In another unrelated title we switched out from the fictionally more relevant ‘plasma’ as our hard currency, purely because testers were left utterly confused as to what it was. Despite Diamonds not making any sense in that game’s world, it solved the problem immediately. 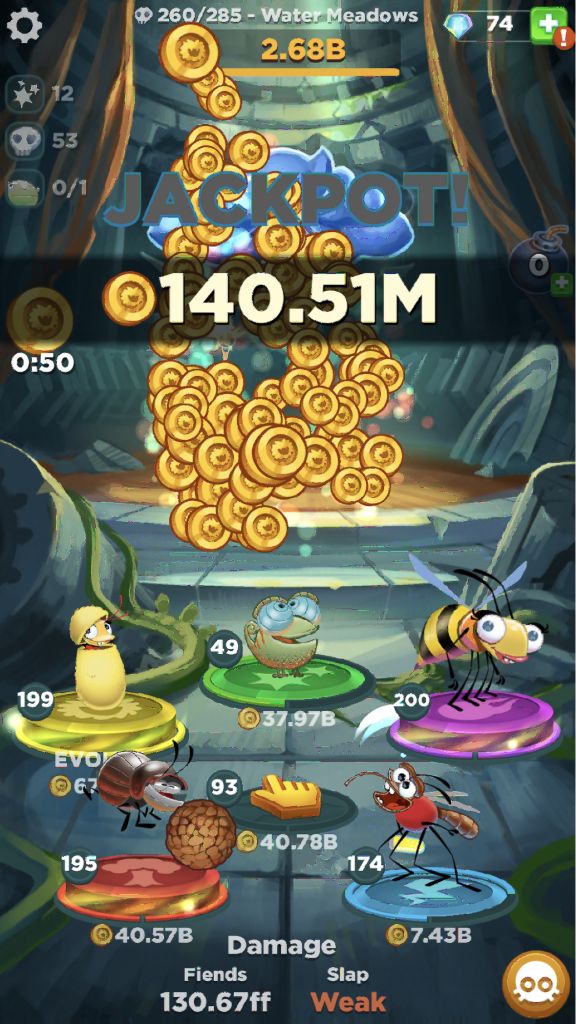 Coins and other items with real-world value connotations are instantly more compelling to collect. Don’t pass up on opportunities to leverage existing biases when it comes to creating a sense of value.

In multiplayer or social-focused games, standing out from the crowd is one of the most compelling motivators for obtaining an item. But even when contact with other players is primarily limited to 30 seconds in a lobby (as with current chart-topper Fortnite), the main goal for players beyond winning is obtaining unique and cool cosmetic items to show off, whether as part of a retention-focused soft subscription or as one-off purchases in-store.

While cosmetic rewards may not influence the mechanics of gameplay, they most certainly do have an effect on how someone feels when playing the game and how they’re seen by others. A unique skin can make you feel special, while a generic skin everyone is walking around in feels terrible. 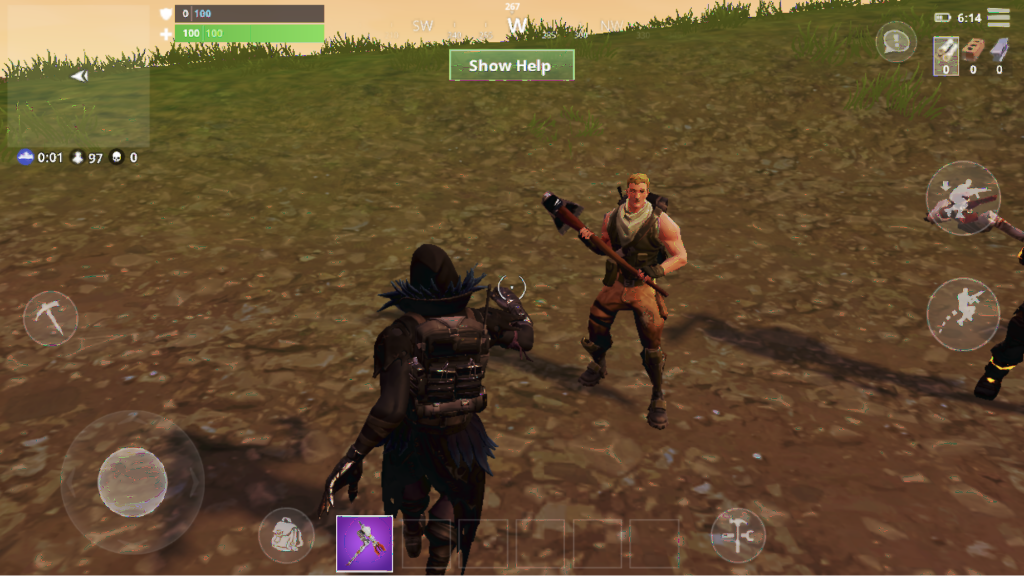 The amount of time you actually see others’ skins may be all of 30 seconds in the lobby and a split second in-game, but that’s plenty of time to show off my limited-time purchase-only Raven skin (complete with Electro-shuffle emote) to this non-paying player.

In fact, Fornite goes one step beyond most other games with a cosmetic economy by stopping the player from having control over how they look entirely until they have at least one unlocked or purchased skin. This lack of choice coupled with the lack of uniqueness or exclusivity is a powerful driver to persuade them to purchase V-Bucks for the in-game store, and gives the cosmetics even more value than other similar titles. 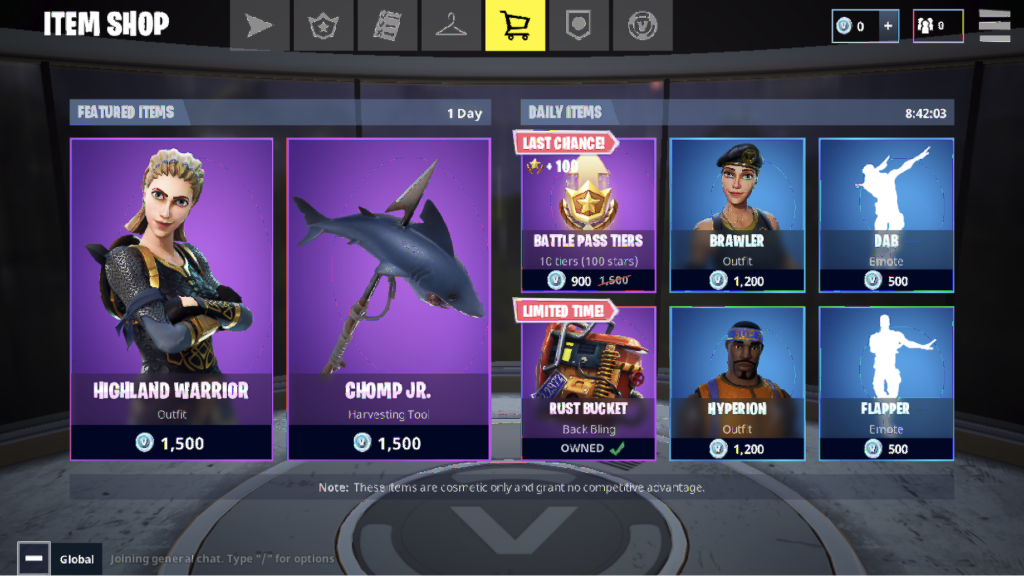 Fortnite goes one step further than other cosmetic-based economies by not allowing the player to select their character unless they own a skin, thereby depriving them both of choice and style if they don’t pay

So when drawing out the taps/sinks economy flow, be sure to sit down and write up the thought process of the player when it comes to valuing the parts of the loop.

Utility: Why is said item or currency now important to the player and how can that value be clearly shown and demonstrated?

Familiarity: Are the currencies and items using established mental models for players? Or are you fighting against what might be familiar to players?

Uniqueness: Are there items which are more exclusive to players? Are players able to show off this exclusivity?

By answering these questions when designing the game economy, you can more easily identify what players will want to purchase when it comes to your monetisation design and what goals players are likely to set for themselves outside of tutorials and challenges. 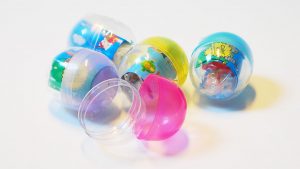 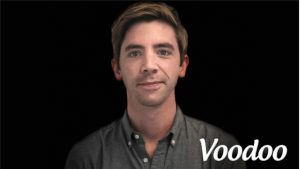 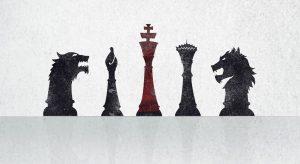